Barack Obama is undoubtedly one of the best-dressed of men. But was he since becoming president? No. So this means that you can master the art of being stylish and become a stylish man at any age.

During his presidency, as befits the head of the most powerful country in the world, Obama was always well-dressed. He was wearing perfectly cut suits and matching accessories. During his two presidencies, we did not become bored with his image – he always looked attractive, even though his wardrobe only had dark blue and black suits, white and blue shirts, and soft-toned ties. And we were still looking at this impeccably-dressed politician with pleasure.

But in the case of Obama, apart from the perfectly matched clothes, what mattered (and still does) was his entire appearance, his general way of being and moving, and particularly the smile he always wore on his face. All these things had a positive impact on the image of this charismatic and nice person. 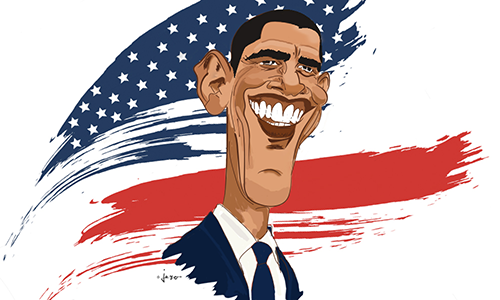 Apart from the appearance, personality also plays an important role. This President of America attracted our attention by such positive qualities as communication skills, eloquence, composure, naturalness, ease, spontaneity and cheerfulness. It is not possible to list all the features that he – as a politician – possessed but I think I have mentioned the basic ones that all public people should have.

It is always pleasant to look at Obama and observe his behaviour, facial expressions, gestures, and way of moving. Let’s recall the moments when he was getting off planes – always with a broad smile on his face – or going down the stairs – with ease, smoothly, with a rapid and springy step. When a woman walks gracefully, we say she is very feminine. As far as men are concerned, we pay attention to proper posture – a straight figure and steady walk – and this is something the former US President can’t be denied – his every single gesture was really chic.

Nevertheless, one of the most charming of Obama’s assets is indisputably his natural smile – not artificial or for publicity, which most often causes the opposite effect, but sincere and unforced, and is always the best and easiest (and the cheapest) way to make a good impression. It was always proven that a nice and cheerful face helps create a positive image in nearly every situation and company. Obama, along with his charming wife Michelle, use this asset maximally, and they both can attract people with their personal charm in a natural and graceful manner.

A good style at the time of Pandemic…

Universal men’s fashion – the classic will always defend itself…

NOTE: These settings will only apply to the browser and device you are currently using.